How do Jehovah's Witnesses deal with pedophilia cases?

Child sexual abuse covered up by the Watchtower

Plentiful television reports, documentaries and lawsuits worldwide state pedophilia amongst the Jehovahs Witnesses. The organization deliberately hides cases of sexual abuse towards children in the goal to protect their public image. It doesn't report pedophilia cases to the police and pedophiles are not punished internally because of the "two witness" rule. If there is only the child victim testifying against the accused, it is not enough. The accused will be acquitted. According to William «Bill» H. Bowen from http://www.silentlambs.org, in 2002 the Watchtower had a database listing 23,720 pedophiles. Today it could go up to 40, 000.
NBC news report, November 21, 2007, Jehovah's Witnesses child sexual abuse. The Watchtower pays money to the victims.
Video : Pedophilia among Jehovah's Witnesses : «Les grands reportages - Radio-Canada» (french). Low quality video. 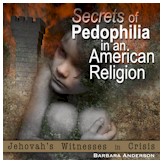 Black Sun Journal has posted a fascinating article about allegations of cover up of sexual abuse with the Jehovah's Witness Watchtower Society.

It is not unusual (perhaps even commonplace) for religious organizations to deny or cover up allegations of sexual abuse;

In most cases where I have represented victims of clergy sexual abuse, the evidence has indicated that persons' in authority within the Church either had knowlege of the abuse, or actively covered it up.

What struck me was the lengths to which the Watchtower Society will go to deny or cover up allegations of sexual abuse within the Church. The article states:

Bowen's group has criticized the Jehovah's Witnesses' policy that if an accused abuser denies the charge, two credible witnesses are required to establish guilt  due to literal application of such Bible verses as Deuteronomy 19:15 ("only on the evidence of two witnesses, or of three witnesses, shall a charge be sustained").

If two witnesses are lacking, the accused is deemed innocent, charges remain confidential and  silentlambs says  parents who warn others are subject to disfellowshipping for slander.

Disfellowshipping is an extreme penalty that means a total cutoff of relationships by family members, friends and business associates who are Witnesses.

Sexual abuse is a crime of secrecy. Since most sexual abusers do not commit their criminal acts in the presence of witnesses the "two witnesses" requirement is one that would be next to impossible to meet.

To go even further by threatening victims who want to warn others of sexual abusers with being cut off from their family, friends and associates (the persons victims would turn to for help and support after being victimized) is perhaps an even greater betrayal than the sexual abuse itself.

In most jurisdictions in it is a crime for person's in authority to fail to report allegations of sexual abuse to the appropriate agency (Children's Services etc.) so that the allegations can be investigated in an independent and unbiased manner.

Perhaps it is time that Religious groups be subjected to the same threat of criminal prosecution as private citizens.

Jehovah's Witness church elder Ronald Lawrence arrested over sex abuse claims dating back to 1980s. November 26, 2013.
Wales This Week - Witness to the Truth
They knock on our doors, preaching peace and good will. But now victims of a South Wales sex abuser claim his crimes were covered up by the Jehovahs Witnesses.
http://www.itv.com/news/wales/update/2014-09-29/missed-tonights-episode-of-wales-this-week-witness-to-the-truth-catch-up-here/

Many Youtube videos on that channel about the Royal Commission into Child Sexual Abuse in Australia, concerning Jehovah's Witnesses : July-August 2015.

Documentary on pedophilia amongst Jehovah's Witnesses of Dec. 1, 2016 on Radio-Canada in french, in english "The Kingdom's Dirty Secrets."

Evidencias: Testigos de Jehová Abusos y Encubrimiento. (Spanish). March 21, 2017.
https://www.youtube.com/watch?v=-L2KL5tzz1k
-UK : Jehovahs Witnesses congregation's efforts to block inquiry squashed. Apr. 4, 2017.
https://www.theguardian.com/world/2017/apr/04/jehovahs-witnesses-congregations-efforts-to-block-inquiry-squashed
-Canada : "Attn: SEXUAL ABUSE VICTIMS IN CANADA!! We are mobilizing some potential law suits. Please either contact me (Tricia Franginha), or contact a lawyer by the name of John McKiggan. He encourages you to contact him ASAP if you are interested in pursuing either a personal claim against the Watchtower OR are interested in being part of a class action with one of his associates". Apr. 10, 2017.
https://www.facebook.com/franginha
https://www.apmlawyers.com/
-Canada : First across Canada class action suit against the Watchtower for victims of sexual abuse. They have agreements with different law firms in different provinces. In Quebec, the laws are different, but a firm will deal with cases in Quebec. They are currently searching for victims. May 1, 2017.
http://www.higgertylaw.ca/jehovahs-witness-child-sexual-abuse-class-action-lawsuit/
-USA : Watchtower lost Lopez summary judgement. May 26, 2017.
Tweet
-UK : Jehovah's Witnesses attacked by Charity Commission over paedophilia cover-up. July 26, 2017.
http://www.telegraph.co.uk/news/2017/07/26/jehovahs-witnesses-attacked-charity-commission-paedophilia-cover/
https://www.gov.uk/government/news/investigation-leads-to-improvements-in-safeguarding-at-jehovahs-witnesses-charity
-Australia : Clergy who fail to report child abuse heard in confession should be charged  royal commission. Aug. 14, 2017.
https://www.theguardian.com/australia-news/2017/aug/14/clergy-who-fail-to-report-child-abuse-heard-in-confession-should-be-charged-royal-commission
https://www.childabuseroyalcommission.gov.au/media-centre/media-releases/2017-08/report-on-criminal-justice-released
-USA : Judge orders Jehovahs Witnesses to release molestation files. Aug. 30, 2017.
https://www.sandiegoreader.com/news/2017/aug/30/citylights-judge-orders-jehovahs-witness-release/
-Australia : Is this the first successful liability case for child sex abuse filed against the Watchtower? Sept. 6, 2017.
https://jwvictims.org/2017/09/06/breaking-news-from-australia-is-this-the-first-successful-liability-case-for-child-sex-abuse-filed-against-the-watchtower/
-USA : Lawsuit against Delaware Jehovah's Witnesses' Elders for not reporting child abuse continues. Sept. 7, 2017.
http://www.nbcphiladelphia.com/news/local/Lawsuit-Against-Jehovahs-Witnesses-Elders-for-Not-Reporting-Child-Abuse-Continues-443003903.html

PEDOPHILIA: lawsuit against the Watchtower in Canada. Contacts :

-Australia: Jehovah's Witnesses among 34 additional organisations to formally sign up to national sexual abuse redress scheme. September 9, 2021.
https://www.abc.net.au/news/2021-09-10/jehovahs-witnesses-sign-up-to-sexual-abuse-redress-scheme/100449204
-Netherlands: Jehovah's Witness HQ in Emmen, in the Netherlands, lost their appeal. The board of the Jehovah's Witnesses tried through the Open Government Act (Wob) to retrieve all data from the investigation into abuse within the community. September 13, 2021.