Source : Time, August 23rd, 1999. p.54-55, "Up from the apes".
http://www.time.com/time/magazine/article/0,9171,991790-1,00.html
See :
http://www.npr.org/templates/story/story.php?storyId=1295460
http://en.wikipedia.org/wiki/Taung_Child
http://www.columbia.edu/itc/anthropology/v1007/2002projects/web/australopithecus/austro.html#afar
http://www.talkorigins.org/faqs/homs/specimen.html
Down here is a copy of the page 94 from the book "LifeHow Did It Get Here? By Evolution or by Creation? (1985) by the Watchtower. In the middle, we can see a "chimpanzee" skull. However, it's a fraud, because chimps have bigger and longer canine tooths than those on the drawing. Furthermore, this skull doesn't have the shape of a chimp skull and anyway, the skull of an australopithecus is larger than a chimp skull. Also, see beside, a genuine chimpanzee skull.
Up : a genuine chimpanzee skull.
http://www.talkorigins.org/faqs/homs/flores.html
Video deconstructing the new brochure "The Origin of Life: Five Questions Worth Asking", published by the Watchtower in 2010.
Multimedia
Books
Contact
Links
Home
Accueil français
Charles Robert Darwin
Alfred Russel Wallace
http://www.columbia.edu/itc/anthropology/v1007/2002projects/web/australopithecus/austro.html#afar

The Watchtower claims that all humans were created directly by God and his son and evolution never happened. On the other hand s theory begs to differ. Numerous archeological, biological and genetic findings prove the evolution theory.

"We need to face the fact that the theory of evolution serves the purposes of Satan. He wants people to imitate his course, and that of Adam and Eve, in rebelling against God. This is especially so now, since the Devil has only a short period of time left. (Revelation 12:9-12) Thus, believing in evolution would mean promoting his interests and blinding oneself to the wonderful purposes of the Creator. How, then, should we feel about this? We feel indignant toward those who try to defraud us of money, or even of a few material possessions. We should feel even stronger indignation toward the doctrine of evolution and its originator, since the intent is to defraud us of eternal life.1 Peter 5:8."

"Evolution teaches that a series of changes gradually fashioned us into a higher form of animal. On the other hand, the Bible says that we started off perfect, in Gods image, but that shortly thereafter, imperfection was introduced and mankind began a long downhill ride."

The Watchtower says that there are missing links in fossils and that its the only proof we need for creationism. However published the origins of species in 1859, when paleontology was still rudimentary. Over the last century and a half scientists have discovered many intermediary forms that were not known by .

Common structures and behaviors often demonstrate that species come from similar ancestors. For example, since the discovery of genetic tools to determine DNA, scientists discovered that the common ancestor of humans and chimpanzees was a species estimated to have lived 6 to 7 million years ago(latest studies say up to maybe 13 million years ago). Thus, humans are not descended from chimpanzees or from any other ape living today but from a species that no longer exists.

The Watchtower claims that the method of dating fossils by radiometric dating is imprecise. Who do they take themselves for? Do they know more than science? Radiometric dating is the product of more than a century of ingenious research and represents one of the most well-substantiated achievements of modern science.

The following are pictures you will never see in Watchtower publications: 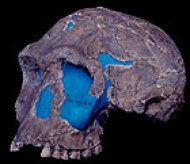